The true acceptance of others: when comparison is the key to understanding

Not a day goes by without examples of historical revisionism: monuments of explorers to be pulled down, street names to be changed, films and songs to be deleted. In times of witch hunts, market research is not doing so well either. When everyone rushes to declare themselves ready to accept others, for example, it is hard to know how ready they really are or how much they avoid telling unseemly truths. But in market research there are simple steps to understand more. 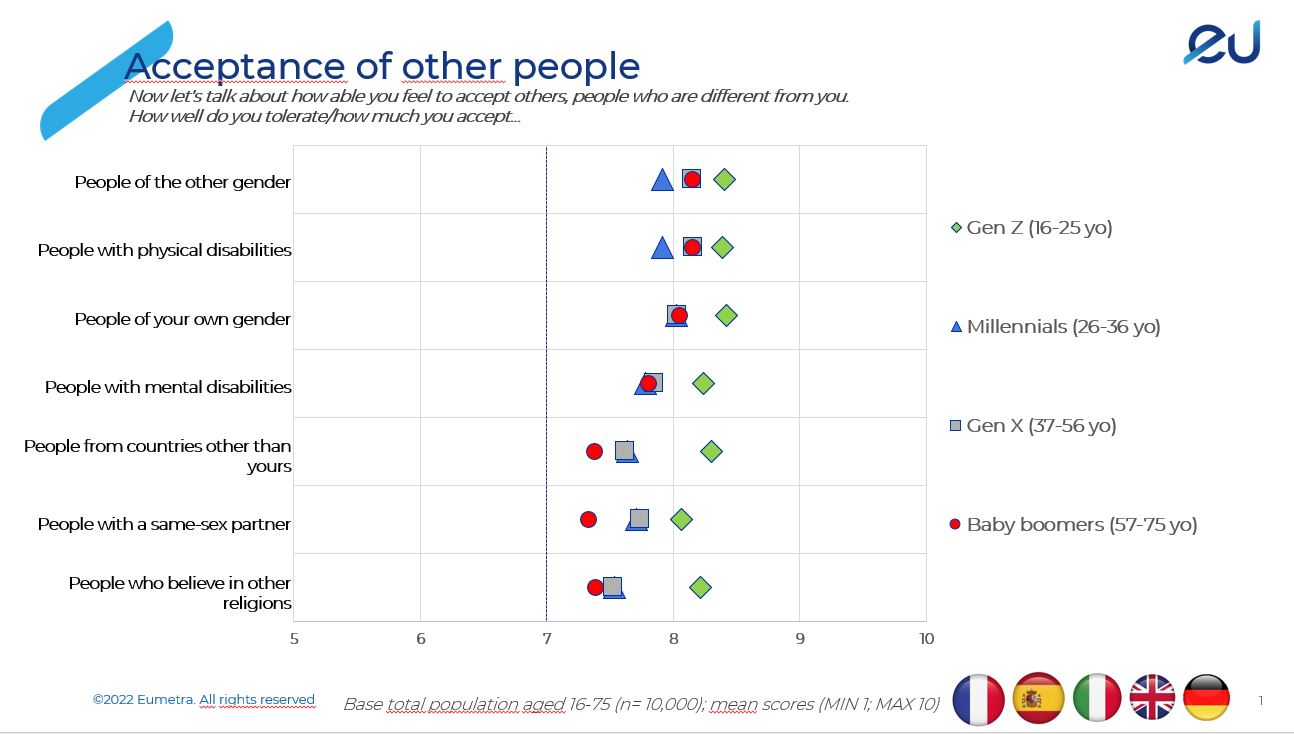 We recently asked how much they tolerate/accept others in a sample of 10,000 individuals, aged between 16 and 75, living in the five main European countries. Overall, the scores seemed very high to us, always above 7 on a scale of 1 to 10, while in reality we don’t seem to perceive all this drive towards others in everyday life.

In such cases, the way to better understand is through comparison. If we break down the data by generation, it becomes clear that not everyone is ready to accept others in the same way. While Gen Z always score highest, other generations, especially Baby Boomers, sometimes lag behind.

For example, their level of acceptance of those from a different country, those with a different religion or those who simply have a same-sex partner is much lower. It is only by comparing their scores with those of other generations that it becomes clear that they are at least one point out of ten behind.

This is a huge gap in market research.

Some might say that Generation Z has grown up with a mixture of ethnicities and genders, while the Baby Boomers have had to process and overcome discrimination.Basically, what for young people is normal, for Baby Boomers is an achievement that needs to be reinforced from time to time. In this case, all the efforts at revisionism, the eagerness to emphasise what is politically correct from what is reprehensible, must be deadly boring in the GenZ’s eyes.

And all the arguments on which today’s populisms are based seem to be essentially futile. So the comparison is not only useful but also brings good news.

Gen Z: the best is yet to come” is a multi-country syndicated survey property of Eumetra International SA.  The final report is available, with a general picture on many fundamental topics, the comparison with other generations and the in-depth sections on: car, bike, bank, FMCG, coffee.

FEAR OF BEING WITH OTHERS AND ANGER: THE CONSEQUENCES OF THE PANDEMIC ON YOUNG EUROPEANS.

We have heard many times that the greatest consequences of the pandemic have been suffered by young people. Not only the children, but also the young people of generation z. […]

Sustainability as a (measurable) element of differentiation

Over the past few years some words have passed like meteors through our skies and  then quickly disappearing on the horizon.  You may remember that there was no newspaper article […]

China closed 2020 with a GDP of almost 14 trillion euros and for at least thirty years has been experiencing a period of exponential growth. This growth has occurred with […]

The effects of unsustainable sustainability, or how the greenwashing effect should be avoided

The adjective “unsustainable” can be used to define things that cannot be upheld nor defended on the level of logical correctness and validity of the arguments. All of us – […]

Generation Z: born to be different

We know that things are not what they used to be. We also know that every cloud has a silver lining and so on, but if also the people of […]