China closed 2020 with a GDP of almost 14 trillion euros and for at least thirty years has been experiencing a period of exponential growth.

This growth has occurred with different speeds based on multiple factors, among which that of geographical location is certainly one of the most relevant. Half a billion consumers now live in the large Chinese metropolitan areas, those with the highest concentration of economic and consumer activities (we are talking in particular of 35% of the population between 15 and 64 years old). 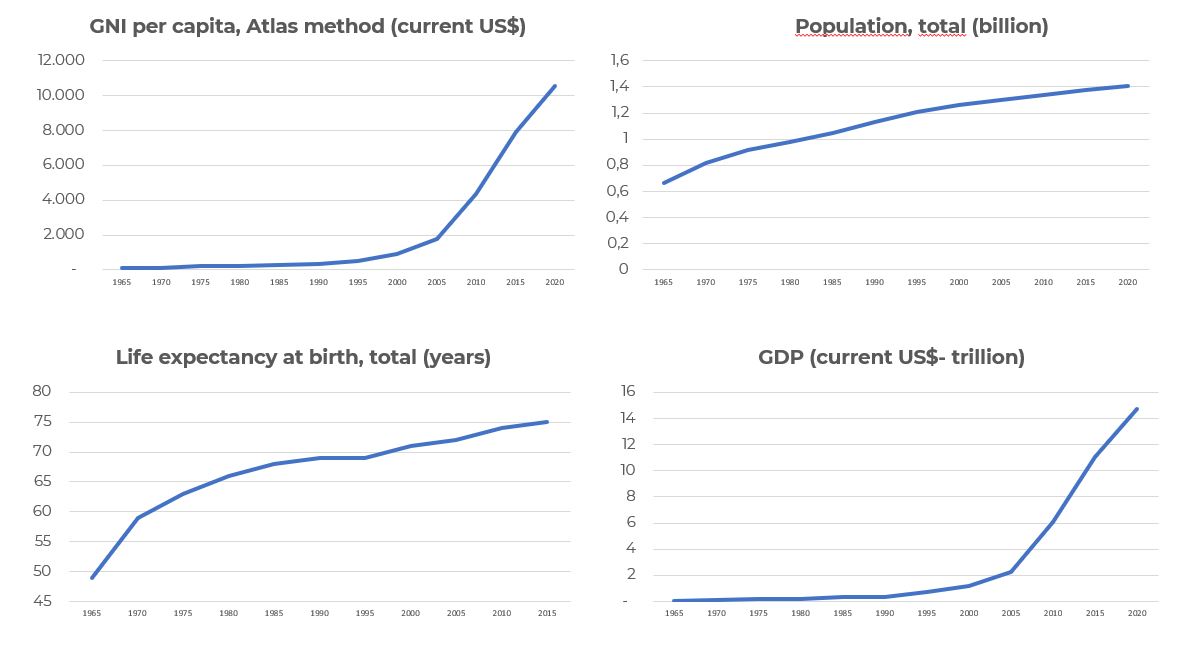 Given its vastness and the resulting territorial, social and economic differences, the approach to the market cannot, however, be univocal. From a strictly commercial point of view, for example, it must be taken into account that Chinese cities are classified according to the so-called “Tier System”, which divides them into different ranges on the basis of criteria such as citizens’ spending power, level of education of the population, average salaries or even number of present foreign brands. Thus, cities like Shanghai and Beijing are considered first tier cities (Tier 1), others like Chongqing, Tianjin and Guangzhou belong to the second tier (Tier 2) and so on.

Within a strategy of approach to the market it is essential to decide whether it is more strategic for the company to focus on first, second, third or fourth tier cities based on the objectives set, the type of target audience expected and the resources available in relation to the notoriety of its brand beyond the Great Wall.

Even the dynamics of consumption in China are guided by habits of life and relationship profoundly different from those of the West: it is typical, for example, that a couple moves to work to large urban areas, leaving custody of children to their parents, who on average after 55 years are in fact retired. On average, the Chinese still marry very young, under the age of 30, and at the same time they have children. This trend often brings with it considerable changes for consumers also at the level of purchasing power or simply of choice of certain products rather than others.

Looking at the other age groups, it is interesting to note that there are two opposite generations that drive consumption, especially digital. If on the one hand Generation Z (i.e. those born between 1996 and 2010) is totally immersed in the Chinese digital ecosystem, today even the “Silver-hair generation” (which is roughly equivalent to those born before 1961) is increasingly accustomed to technology and dedicates itself more frequently to online shopping. In addition to having an often greater purchasing power than Gen Z, this category of consumers also has different needs and demands from those of young people. These factors should not be underestimated when preparing to choose your target or diversify your offer on the Chinese market.

Speaking of investment targeting, we cannot talk about the digital theme. It is not enough to know which areas and categories of consumers to aim for: it is also necessary to understand with which channels to effectively reach the public.  The Chinese digital ecosystem is increasingly diversified and only by finding the right combination of platforms is it possible to respond to the different needs of users and create a relationship between brand and local audience. For example, if you want to sell online in a B2C perspective, it is better to rely on platforms such as Tmall (equivalent to our Amazon and first local marketplace), where you can create a Flagship Store and invest in marketing campaigns to guide users of the platform to your online store.

We must also think about how to support the sales strategy through effective communication, in particular by working on brand awareness: it is not obvious that a popular brand in the West is already popular in China. If WeChat – which allows you to communicate with your customers, promote products and make online payments – is essential with its 951 million monthly active users, there are several platforms on which to develop your communication strategy. From Douyin (the Chinese version of Tik Tok) to Little Red Book (a sort of fusion between Pinterest, Instagram and an e-commerce) passing through Weibo (the “Chinese Twitter”), there are numerous solutions available to companies to create an integrated and innovative communication strategy, which can reach the different groups of users in the most effective way.

Finally, we cannot neglect the theme of collaborations with Key Opinion Leaders (KOLs), fundamental figures to involve the audience and establish a relationship of trust with the brand. The channels to activate these collaborations can be social media or even live streaming platforms (two things that often coincide). Through these channels, KOLs can show products live, entertain the user and build trust in a product.

Where to start to activate the Chinese consumer: Check-in China

In such a different and rapidly changing scenario, how to activate the Chinese consumer?

Eumetra (Market Research Institute) and East Media (company specialized in Digital Marketing and E-commerce for the markets of China, Russia and South Korea) launch the first observatory on consumption dynamics, spending habits and the relationship of consumers with the different product categories in China, providing a unique mix of skills on the market.

Check-in China is the multiclient study useful for:

A repository of basic information to guide investments in the Chinese market, based on a solid sample (5000 cases), distributed for the main demographic indicators. The first episode of a permanent observatory on the diversified and dynamic Chinese population.

Learning without thinking is useless. Thinking without learning is dangerous

FEAR OF BEING WITH OTHERS AND ANGER: THE CONSEQUENCES OF THE PANDEMIC ON YOUNG EUROPEANS.

We have heard many times that the greatest consequences of the pandemic have been suffered by young people. Not only the children, but also the young people of generation z. […]

Sustainability as a (measurable) element of differentiation

Over the past few years some words have passed like meteors through our skies and  then quickly disappearing on the horizon.  You may remember that there was no newspaper article […]

The true acceptance of others: when comparison is the key to understanding

In times of sustainability, political correctness reigns supreme. Not a day goes by without examples of historical revisionism: monuments of explorers to be pulled down, street names to be changed, […]

The effects of unsustainable sustainability, or how the greenwashing effect should be avoided

The adjective “unsustainable” can be used to define things that cannot be upheld nor defended on the level of logical correctness and validity of the arguments. All of us – […]

Generation Z: born to be different

We know that things are not what they used to be. We also know that every cloud has a silver lining and so on, but if also the people of […]